News from the Field

Every year, from the Kimberley to Cape York, AWC field staff conduct Northern Australia’s largest non-government fire management program. With helicopters, drip-torches, matches and leaf-blowers, they carry out prescribed burns across millions of hectares throughout the dry season, as well as targeted operations over the Wet.

At Mt Zero-Taravale Wildlife Sanctuary in North Queensland, AWC’s Regional Operations manager Tim White is dealing with especially dry conditions after months of below-average rainfall. While the majority of prescribed burning is conducted early in the year, Tim has carried out targeted burning in every month of 2018 so far.

In late September, a wildfire was encroaching on the northern boundary of Mt Zero-Taravale, into an area of wet sclerophyll eucalypt forest that hadn’t burned for at least 3 years. Left unattended, the fire threatened to burn further into the sanctuary, and may have smouldered on for weeks or even months. By igniting a short, strategic burn, Tim and the team were able to halt the spread of the fire (see video).

Restoring healthy fire regimes is a cornerstone of effective land management for conservation. At Mt Zero-Taravale, AWC’s strategy identifies several key objectives of fire management. In the wet sclerophyll forests in the northeast of the sanctuary, decades of fire exclusion allowed weeds and rainforest species to invade and alter the forest structure, smothering the grassy understory. Restoring a regular fire regime is key to protecting this threatened ecosystem and the wildlife it supports. In other parts of the sanctuary, prescribed burning is designed to break the country up into a mosaic pattern of burnt and unburnt patches, and to reduce the overall fuel load. Still other vegetation communities, such as vine thickets and rainforest, rely upon the complete exclusion of fire.

Since 2005, AWC’s approach to fire management has brought about a substantial shift in fire patterns at Mt Zero-Taravale. The proportion of the property that burns in late dry season wildfires has been dramatically reduced: from 12% in the period prior to AWC management, to less than 5% on average since 2005. This has resulted in eliminating large-scale, intensive wildfires which periodically swept through the area prior to AWC management. 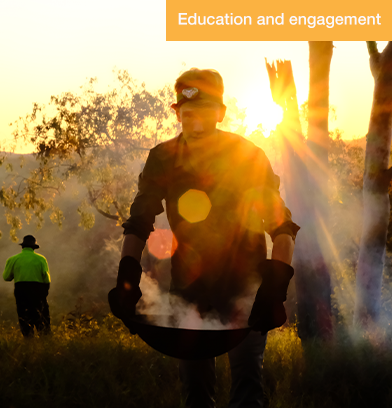